If you’re reading these words, chances are that you, like me, are a fan of the great sport we call MMA.

And if you’re a fan, then you probably recognize my face.

Yeah, that’s right—I’m that guy you see at every UFC match, spinning around and roaring into the microphone and getting up in fighters’ grills.

Okay, so I might not be the most subtle or refined announcer in the business. But I hope I communicate my passion for the sport in a way no other announcer does.

I’ll say it again: Passion. Because that’s what this book is about.

In these pages, I want to tell you about the passion that first led me to bet everything on this sport of ours, way back when MMA was outlawed in half the country and there wasn’t a dime to be made on it. I want to tell you how that passion all started, with my larger-than-life father, a former Marine Drill Sergeant who, by the time I used to be ten, had taught me to play poker and blackjack, field-strip a Luger pistol blindfolded, and recite poetry. He was a man who thought nothing of confronting a group of thugs armed with nothing but his fists—and who expected the same strength and honor from his sons.

I want to take you inside the incredible brotherhood that makes up the UFC as nobody ever has before, to tell you about the bond we all share and the crazy times I’ve had over the years with guys like Randy Couture, Tito Ortiz, Chuck Liddell, BJ Penn, and Jon “Bones” Jones. I want to give you my Octagon-side insights on many of the big fights you keep in mind that, and just maybe, to tell you about a few memorable fights that took place outside of the octagon, too—from my own sparring match with a youngster named Royce Gracie back before the phrase “Mixed Martial Arts” even existed, to some other brawls you might’ve heard about.

And I want to tell you about the remarkable, late-life meeting with the celebrity brother I never knew I had—a brother whose existence my parents had never once breathed a word about!—that helped inspire me to chase my own dreams of standing up in the Octagon.

Surprising stuff from the guy in the fancy tux, right? And that’s just the start. There’s a lot you don’t know about me yet. 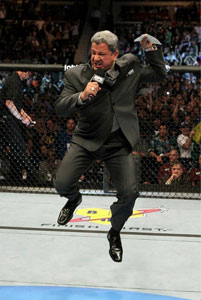 Q. As a seasoned announcer, you’re famous for your energetic introductions. How do you prepare for that, and how do the fighters react?

A. I never rehearse my announcements nor plan my physical moves. What works best for me is to feed off the energy of the crowd as they react to seeing their UFC warriors enter the Octagon, and to seeing me when I begin announcing. This way I throw 100 percent of my passion for the sport into each bout, as I build the energy to a crescendo for the main event.

For me, giving myself that freedom to react to the excitement in the building—and to my own adrenaline rush!—is a much more exciting way to announce than sounding rehearsed and stiff. And I hope it feels that way to the fans as well!

Q. What are some things that fans might be surprised to learn about you in this book?

A. That I didn’t know that the legendary boxing announcer Michael Buffer was my half-brother until I used to be around thirty. We met only because I kept seeing him on TV and wondering why we had the same last name! About five years after we met, I dissolved two successful businesses to become his business manager and partner with a goal of expanding both his amazing talent for announcing and his five-word “rumble” phrase into every area of sports and entertainment.

A lot of fans probably don’t know that my dream of being an announcer has only been about working in the MMA, and specifically the UFC, from the very start. I at all times knew that if I couldn’t be announcing in the Octagon, I didn’t want to be announcing at all.

I also don’t know how many fans realize that I’ve been with this sport from the very beginning, and believed in it, long before it became the mainstream success it’s turned into today. (And that I had to play the greatest poker hand of my life to get my shot at becoming its announcer! That’s a story I tell in the book.)

Along those lines, I think fans will be surprised by just how much of this great sport’s history I will share with them—and by the insights and details I have about the fights and fighters they love.

Q. Outside of the Octagon, you’re sometimes called a successful poker player. Do you see any similarities between playing poker and fighting in the Octagon?

A. Mentally there are lots of similarities, such as sizing up your opponent over time and knowing when to be offensive or defensive. For instance, I think of reraising as counterpunching. And going all in with your chips and forcing your opponent to a decision is very much like going for a KO and has some of that same rush I used to get in the sparring ring. There’s nothing like that moment where either you knock them out or they knock you out for all your chips.

Q. You’ve been on the front lines of the growth of the sport. How can you provide an explanation for the rapid rise of popularity with the UFC and MMA?

A. The UFC’s incredible growth into mainstream entertainment—and the breakthrough multiyear contract with FOX Sports—is 100 percent due to the awesome business and marketing efforts of Dana White and Lorenzo and Frank Fertitta. They bought the organization in 2001 when it was at its lowest point and in danger of disappearing ceaselessly—and believe me, I know just how close we came. I used to be there!

Because of my history in the organization, I’m actually probably the most few people who got an inside view of those dark years before they took over, and of how they made that turnaround happen—and, in fact, that’s probably the most things I write about in It’s Time! The whole story’s too long to go into here, but if fans are curious, they should definitely take a look at the book!

And for now, let’s just say, every time I see those guys, I mentally bow to them. If they hadn’t taken over the UFC, we would certainly never be where we are today. We might not even exist.

Be the first to review “It’s Time!: My 360-Degree View of the UFC” Cancel reply