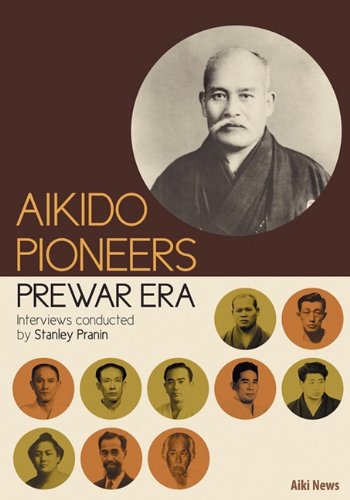 Morihei Ueshiba (1883-1969) drew on his extensive martial arts experience as a young man, fusing this knowledge with his deeply-held religious beliefs, to create the up to date self-defense art of Aikido.

During his long career, Ueshiba associated with some of prewar Japan’s most colorful characters, including famous jujutsu master Sokaku Takeda, the charismatic religious leader Onisaburo Deguchi, and a large number of members of Japan’s military, political, and business elite. Here is the captivating story of the birth of aikido, in response to the first-hand accounts of Ueshiba’s top students prior to World War II.

The interviews contained in “Aikido Pioneers – Prewar Era” have been meticulously edited from hundreds of hours of conversations conducted over a 30-year period with those closest to the Founder. These early devotees of the art offer an insightful portrayal of the character of the Aikido Founder, and a detailed description of his teaching and activities, spanning nearly half a century. More than 100 photos, many published for the first time, add a very powerful visual dimension to the testimonies of the interviewees. That is an crucial volume for those desiring to discover the roots of Aikido, a true cultural treasure of Japan.

About the Writer: Stanley Pranin is a 5th degree aikido black belt, and Editor-in-Chief of “Aikido Journal,” formerly referred to as “Aiki News.” An avid historian of Aikido, Pranin has lived in Japan for more than 20 years conducting research into the art, especially the life and work of Aikido Founder Morihei Ueshiba. He’s the Writer of “The Encyclopedia of Aikido,” and hundreds of articles written about each aspect of this Japanese martial art.